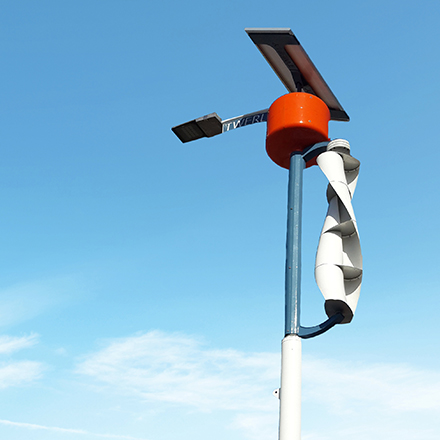 1.6 billion people around the world live without access to electricity

Succeed TWERLY Street Lights, developed in South Africa at the Nelson Mandela Metropolitan University, is a hybrid street light that runs entirely off the grid and is powered by both solar and wind energy. The team manufactures, installs, and provides maintenance of the TWERLY™. The TWERLY™ also has remote monitoring and surveillance capabilities, can serve as a WiFi hotspot, and can provide video surveillance. This innovative street light is so much more than just a source of light. People with access to reliable lighting can work later, feel more secure, and can participate in community activities. The added benefits of WiFi and surveillance will mean big things for off-grid communities around the globe.

Nikolas Jankovich-Bèsàn: Founder. Nicolas is an entrepreneur with full and part ownership in a number of small businesses, including Karoo Spekboom Nursery, Jankovich Honey and Hives and Jankovich Boutique Olives and Olive Oil. In addition, he has been the Director of Operations for KEPT (Pty) Ltd; a biometrics company start-up company. He has also worked as a Financial Planner in the Asset Management industry for over 20 years and holds various local and international management diplomas.

Michael de Lange: Director Operations. Mr de Lange has been working in the Information Technology industry for 5 years. His previous position was that of Divisional Manager: Commercial Services for Mars Technologies (Pty) Ltd. His responsibilities included Finance, HR and all Legal aspects of the company. Mr de Lange was instrumental in the start-up and success of Mars Technologies alongside the Managing Director, since their inception in 2009. Prior to this, he spent 2 years as an accountant at Business Connexion, which at the time was the largest IT Company in South Africa.